This wastewater treatment system currently treats approximately 826,000 gallons of water in one million gallon batch tanks, treating one batch per day.  They have (3) one million gallon batch tanks for treatment.  The primary wastewater is generated from cooling towers, powertrain production line, and the paint coating lines.
‍
Discussions with this facility began in 2001.  They were treating their wastewater using Ferric Sulfate, Sodium Hydroxide, and 25 lb. bags of Lime.   Depending on the quality of the batch, both Anionic and Cationic polymers were also used with final polishing through an ultra-filtration system.  The hazards and cost of utilizing Sodium Hydroxide, along with an inefficient use of time and risk of injury with the daily lifting and dumping of bags was the starting point in using a WKM Liquid Lime Slurry.
‍
Normally, operations would run jar testing on each batch. The testing would show dosage rates of either the Anionic or Cationic polymer and volume of Ferric Sulfate.  Caustic or Lime was added based on the Ferric Sulfate volume.
‍
WKM introduced a ready to use Liquid Lime Slurry with the overall goal to create a safer work environment for employees while also providing the chemistry and consistently needed to achieve the target pH of 10.2 in the clarifiers for proper Zinc and Nickel removal. After running an initial proof of concept trial in 330 gallon totes, we then moved to convert an unused sludge thickener tank to store bulk loads of Liquid Lime Slurry.  Through the trial periods, we also recommended increasing the pH with the Lime Slurry first and then the addition of their polymer thereafter which then eliminated the need for Ferric Sulfate usage.

We concluded this conversion by supplying a final system of two 10,000 Lime Slurry storage tanks, a 5 HP Lightnin mixer was installed with a 2” air diaphragm pump resulting in a safe, hands-off Lime Slurry storage and dosing system.   Lastly, with the elimination of Sodium Hydroxide and Ferric Sulfate, this facility saw an approximate 40% reduction in chemical costs used in wastewater treatment. 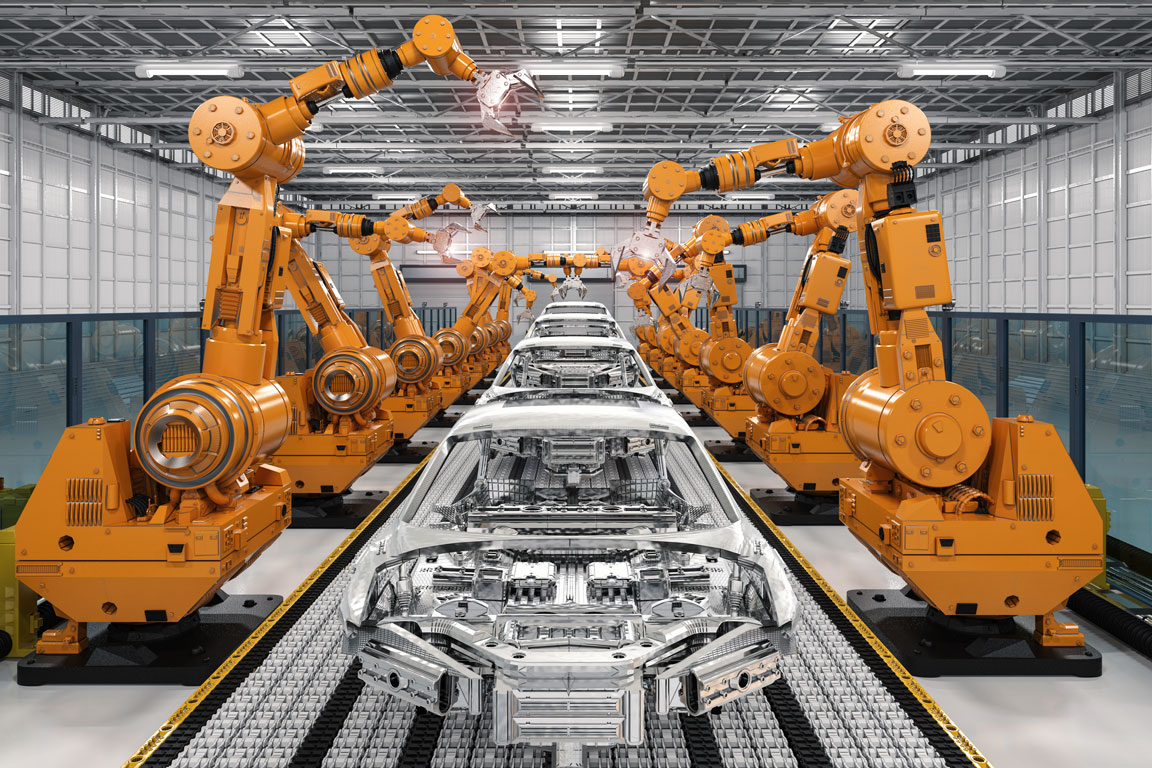 This 20 year WKM customer treats their wastewater 24 hours per day, 7 days per week.  They discharge between 50,000 – 90,000 gpd. They are currently using WKM Liquid Lime Slurry for pH control and Byogon to enhance biological activity in the aerated digester.

This plant was initially using two dry products for pH control, Sodium Bicarbonate and Hydrated Lime.  They were regularly facing an immense amount of dusting - resulting in routine DEP violations, continuous system plugging, and calcification from using a dry unreacted product.  The target pH prior to the biological treatment is a 7 which is controlled with a 4 to 20 mA signal.   WKM Liquid Lime Slurry was implemented by converting the dry storage system to a liquid storage tank, keeping equipment costs to a minimum.

The second phase of treatment included their biological process, which is one large tank consisting of mixed liquor, a digester, a clarifier, and a well that holds water before it is sent to the local Sanitary Authority.  Water is in the mixed liquor/aeration basin part for 1-2 days.

With an ever changing production line and a series of plant and system upgrades, they noticed changes in the biological activity.  Historically, they’ve always had challenges with settling.  Now the sludge appeared to turn black, septic, and began to see dramatic effects on settling rates.  Overall the health of the biology remained in a state of destress. This caused major bio upsets resulting in routine reseeding on the biological activity.

Samples were pulled from the mixed liquor, clarifier blanket, and effluent to evaluate the health of the bacteria by performing an ATP test and evaluating stress levels of the bacteria.  Initial results showed a biosystem that was under significant stress, causing the mixed liquor to have low energy and insufficient active biomass.

During the first trial period, the solids color began to change to a tan and you could visual see improvements to their settled rates.  It was concluded that adding Byogon improved the efficiency of the biological treatment and created a healthier biomass, better settling in the clarifier, and most of all, a preventive measure so they wouldn’t have a major upset again.  Sodium Bicarbonate was used to offset the nitrification which overtime was no longer required.  ByoGon is now fed regularly into the 150,000-gallon mixed liquor section of the of the biological treatment tank.

Their Lab technicians have stated ByoGon has helped them immensely as the settling is better than ever. 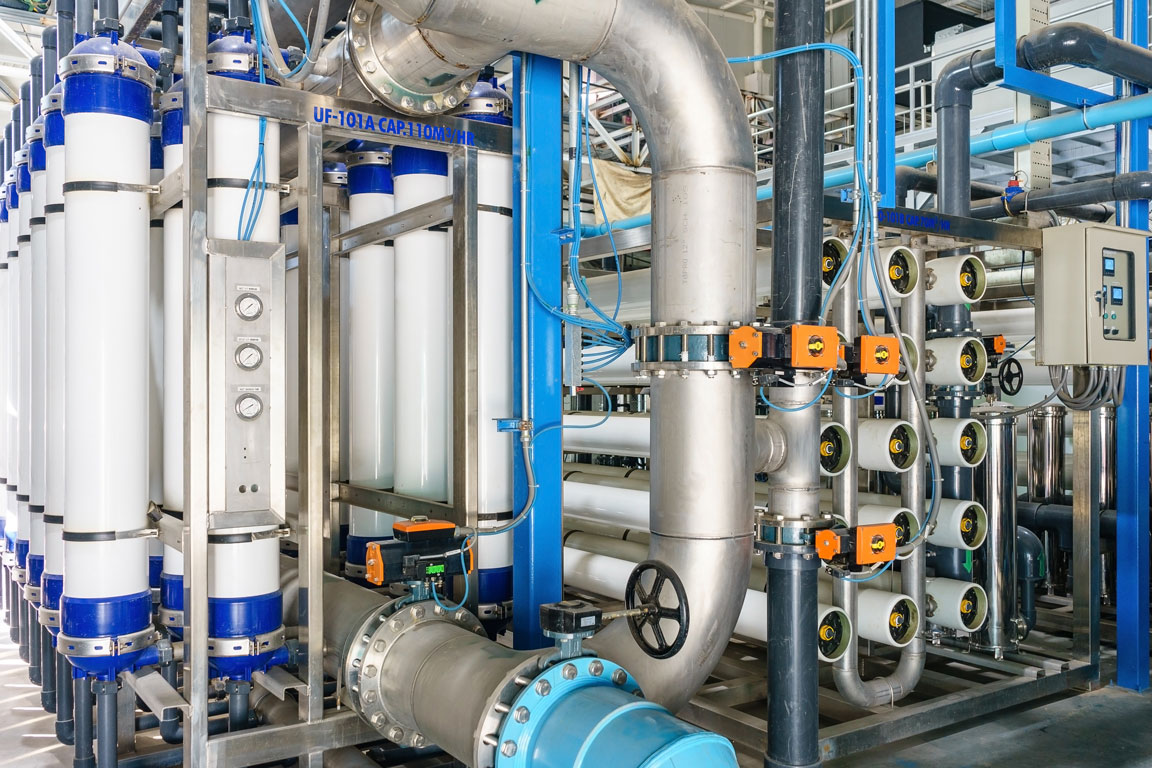 This customer is an active mine location, treating two primary pools of deep mine water and rain runoff.  The influent pH of 4.5 – 6 with a pH goal is 6-9.   Their Fe effluent ranges from 18 – 150 ppm.  They target a pH of 9.0 to remove the Fe.  The water flow ranged from ~800 gpm to a max of ~1500 gpm depending on rain events.  The waterfall is 300 feet long and it spills into a lagoon with five curtains for settling. The water then flows downhill to a local creek.   The final water tested at 9.0 pH and 2.0 ppm Fe.

A 6,000-gallon poly tank was stationed at the top of their impoundment hill where they would receive mini-bulk trailers of 20% Caustic Soda.  The Caustic feed rate was ~1,500 gpd (1.0 gpm) at 800 gpm of water, so when the water levels increased, that resulted in higher Caustic dosage rates.  They routinely saw freezing issues in the cold months with the Caustic system.

Along with the freezing, they were continuously producing a poor quality sludge in their settling ponds while also having a major TDS problem.  The sludge was extremely watered down and fluffy which required them to vacuum the excess water out prior to shipping for disposal and having to dredge out the ponds more frequently.  Finally, with the high costs associated with usage of Caustic and the treatment problems, we began to discuss the options to install a Liquid Lime Slurry system for treatment.

A trial was conducted using the 7000 Gallon WKM Trial unit.  A sample of the water analysis is as follows:

Based on the 25% Caustic pricing of $780 per dry ton, we have conservatively outlined a cost savings for this mine location of approximately $100,000 / year when converting to WKM Liquid Lime Slurry.  This savings did not include reduced TDS or improved sludge quality.

With the trial providing a cost savings, improvement in solids, and overall treatment quality, the decision was made to move to a complete WKM Lime Slurry system.  A new electric line was installed and a 12’ x 12’ x 12” pad was poured for a 10' x 15’ (8,800 g) Tank with a mechanical mixer, a peristaltic pump, and a cellular monitor for inventory control. 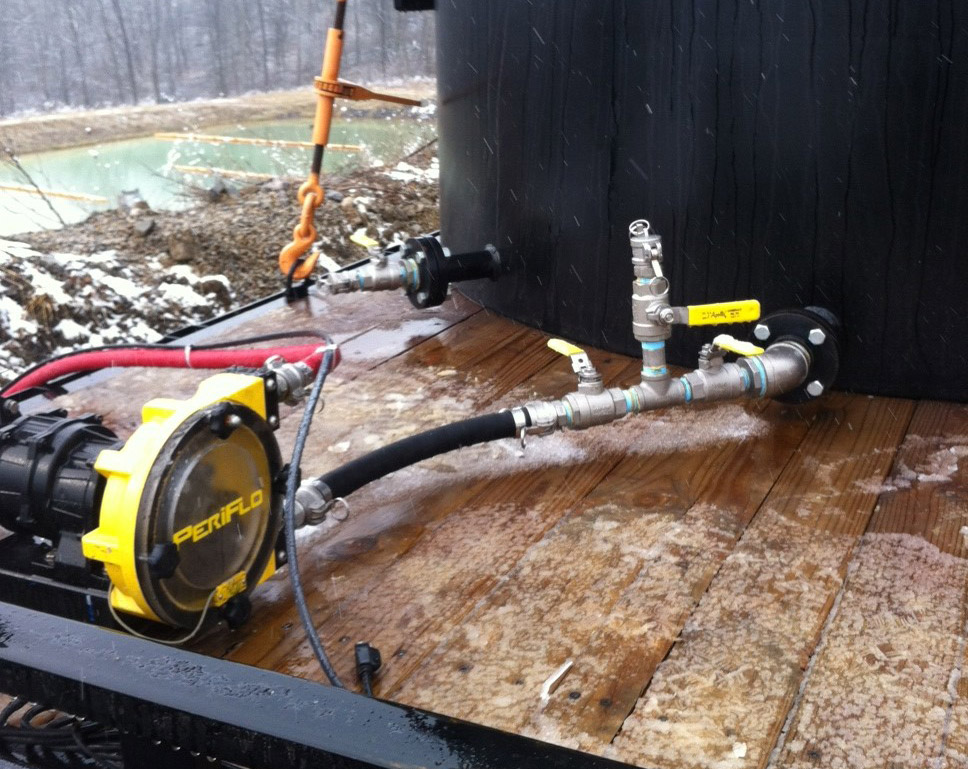 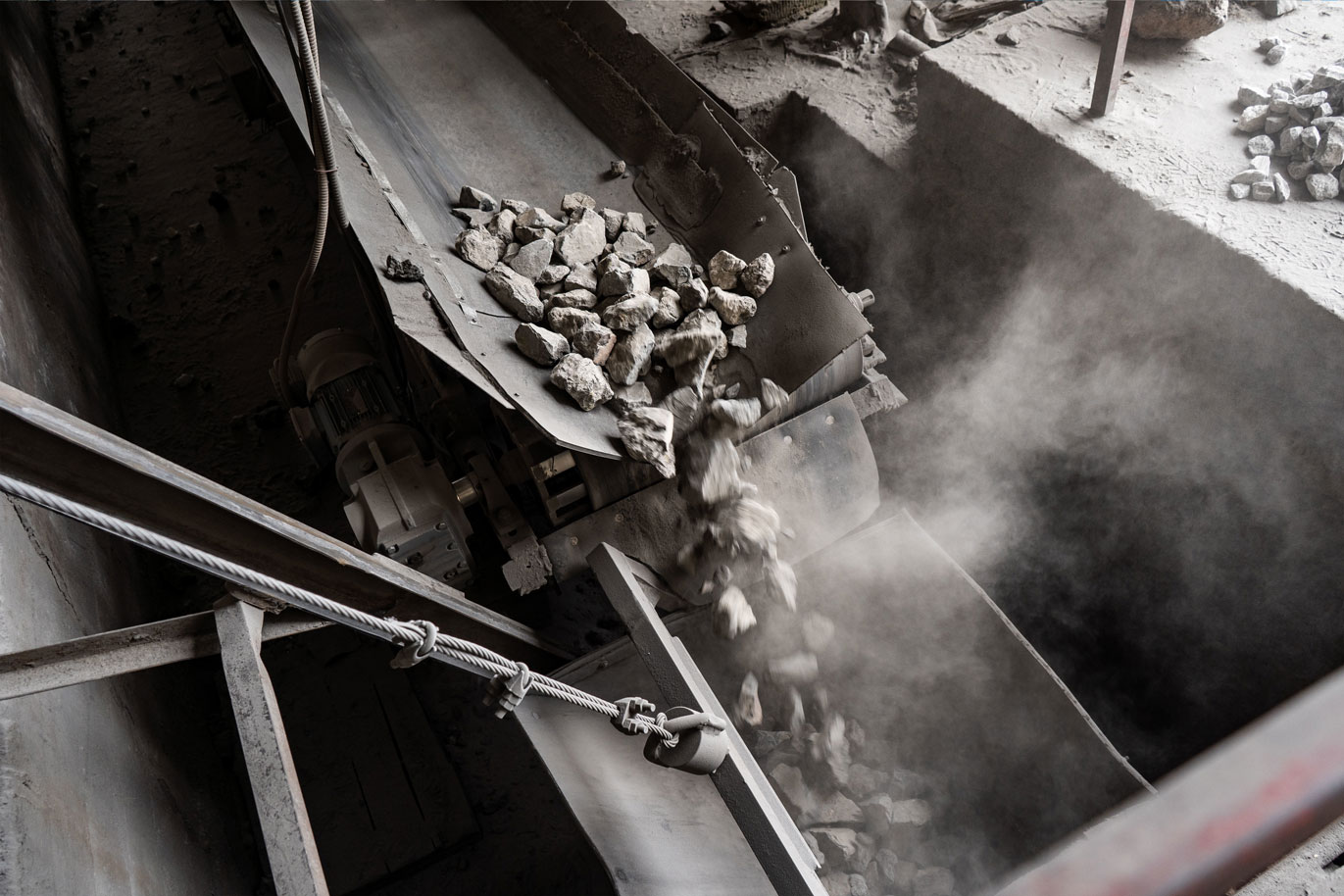 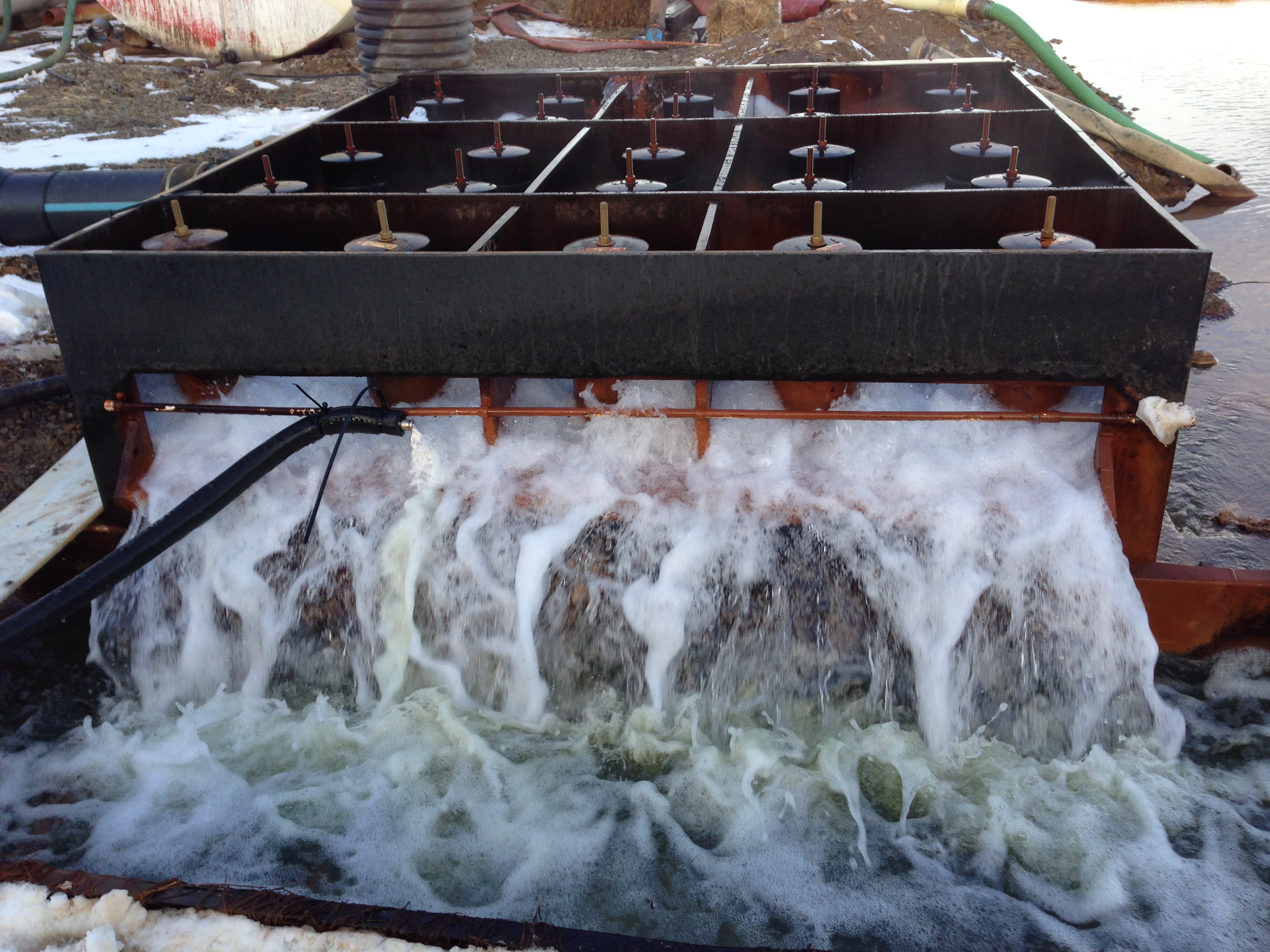 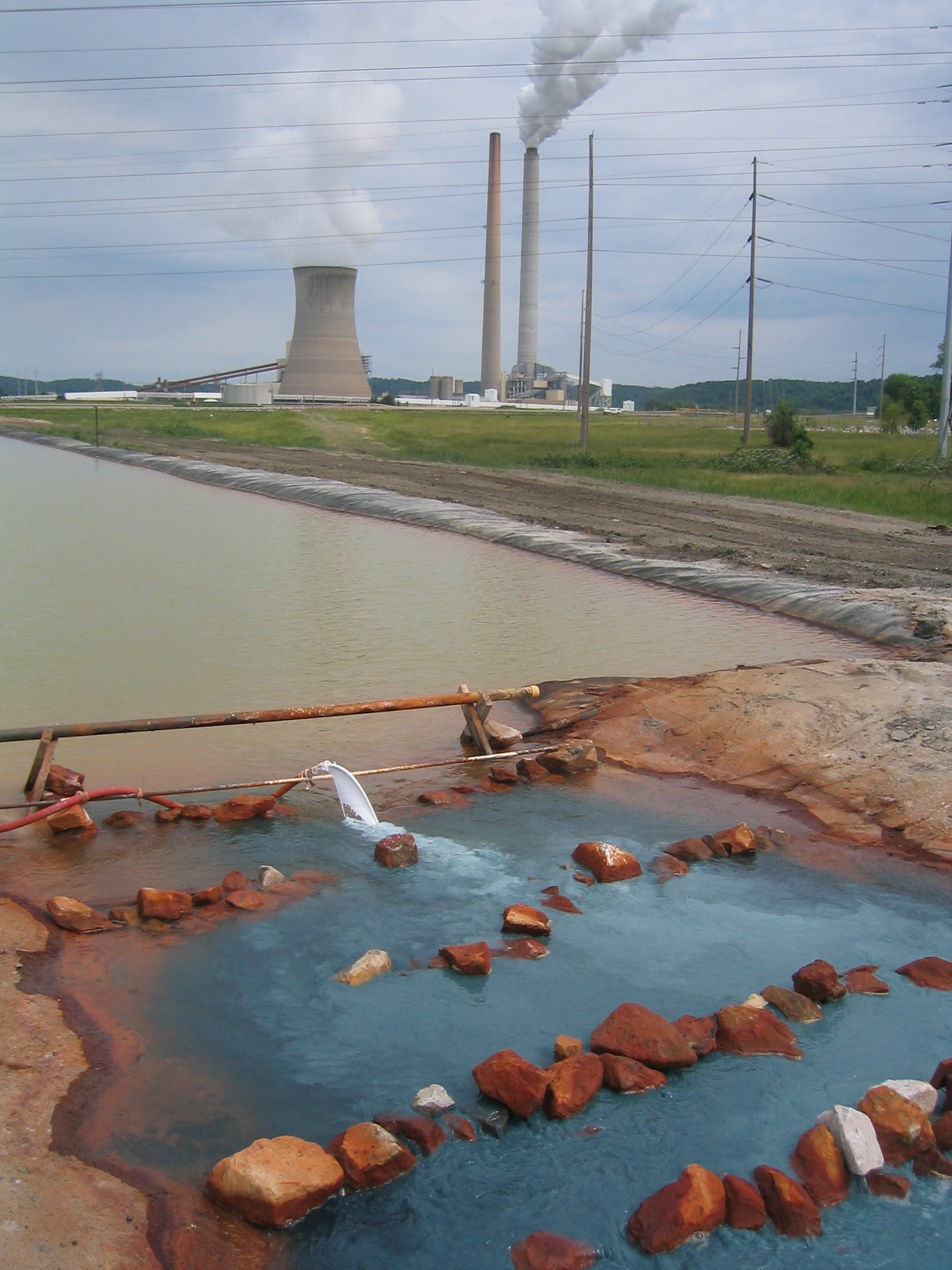 They were getting more organic matter than they could handle based on the production and were interested in using Byogon to improve BOD removal rates and boost the overall biological efficiency.  COD can range from 5,000 lbs. per day to 20,000 lbs. per day. Average flow is around 700,000 gallons per day.

The overall treatment summary is as follows: Influent water to the anaerobic digester, through two clarifiers, two facultative lagoons with one lagoon discharging to POTW and the other lagoon to a local stream.  They were getting about 250 dry tons of solids in the lagoons each year. The clarifiers stay at about 90 degrees F.  They were also using the methane they create in the boiler to warm the water in the digester during the colder months of the year.

WKM Magnesium Hydroxide is also being fed at the influent building about 150 yards from the WWT building.
‍
After evaluating the system it was agreed that we would feed Byogon into the influent water going into the anaerobic digester. A 55 gallon drum was provided and a WKM peristaltic metering feed pump was used to administer approximately 1 GPD of Byogon on a continuous basis.  We based the product feed on peak flow, with the goals to stabilize and improve sludge settling in the clarifiers, increase gas production, and overall more efficiency.
‍
WKM ran ATP testing prior, during and after trial periods to analysis and monitor the health and stress of the bacteria in the system.

Over the course of the 55 day trial, the cATP in the RAS line continued to rise.  The trial then turned to continuous daily doses and full time use.  The cATP climbed to the highest it has ever been. BOD readings began to show in the ranges of 94 mg/l on his discharge, as anything over 200 they were see a surcharge.  Operators stated that after the addition and injection of Byogon, when working with aerated lagoons, they would see an approximate reduction of 20% in solids. When Byogon is utilized throughout the year it also aids in the settling of the facultative lagoons during any temperature inversions. 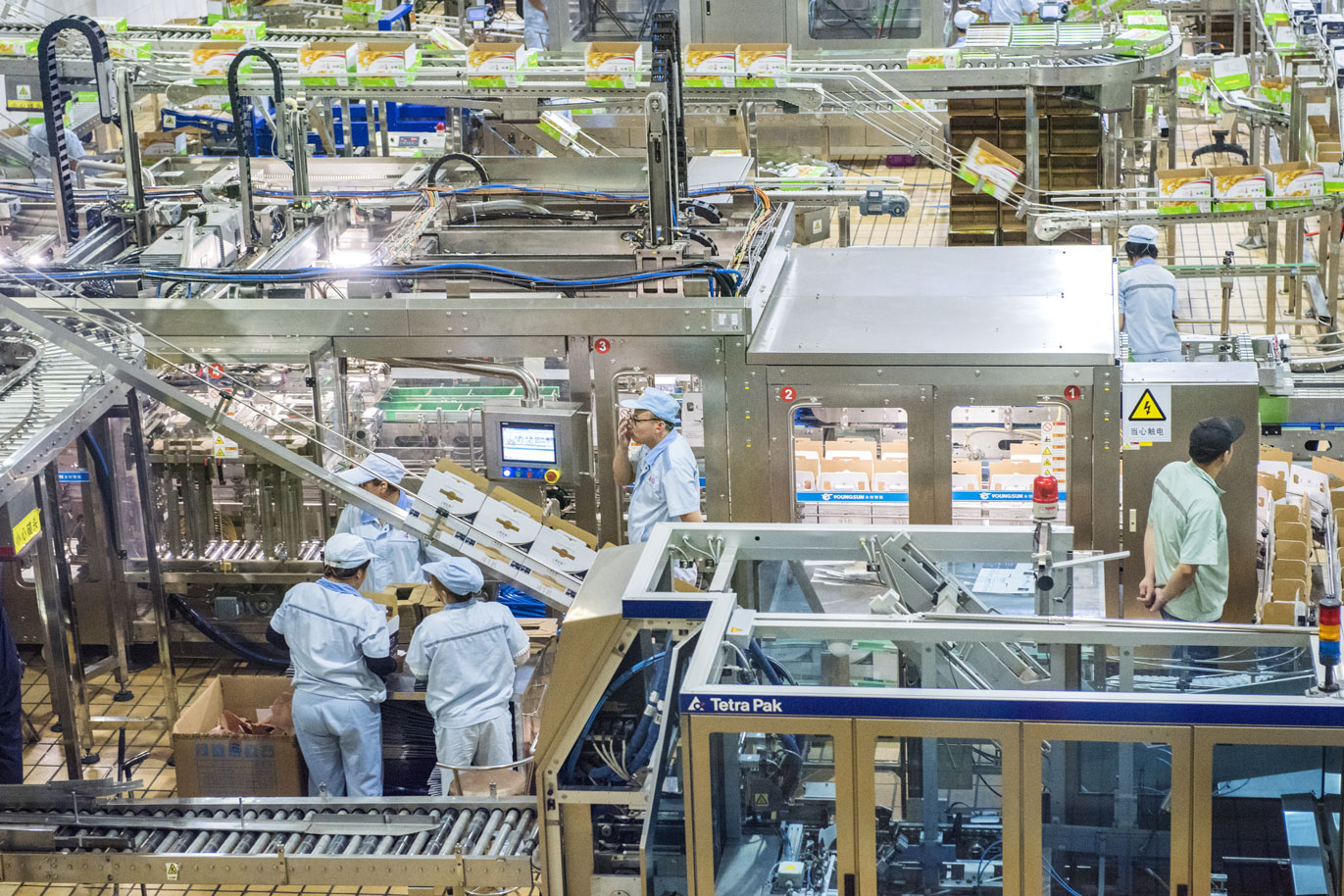 Trial was first run for three months in 2017 to analyze the benefits of using Magnesium Hydroxide at a Western Pennsylvania Municipal Authority. This is a biological treatment facility treating local residential waste and rainwater runoff.  Water flow rates are approximately 3 million gallons per day. The municipality and their team along with the PA DEP monitored this trial. For this application, WKM Magnesium Hydroxide was fed into the influent side of the aeration basins with the goal to boost alkalinity, help the nitrification process, improve ammonia removal rates, and keep the pH above 6 to meet their effluent requirements. Referencing the Calcium Carbonate equivalent to measure the alkalinity, Magnesium Hydroxide would add 1.68 lbs. of Calcium Carbonate equivalent per dry lb. of the product. When the municipality and their team decided to treat for ammonia removal they found out they would need 7 lbs. of alkalinity for every 1 lb. of ammonia removal needed. This factored to be a dosing rate of 60 to 90 gallons per day of Magnesium Hydroxide. This plant does not have ammonia limits yet, but they are monitoring and running tests twice a week. The municipality and the DEP continue to monitor ammonia treatment and to also meeting their fecal limits. 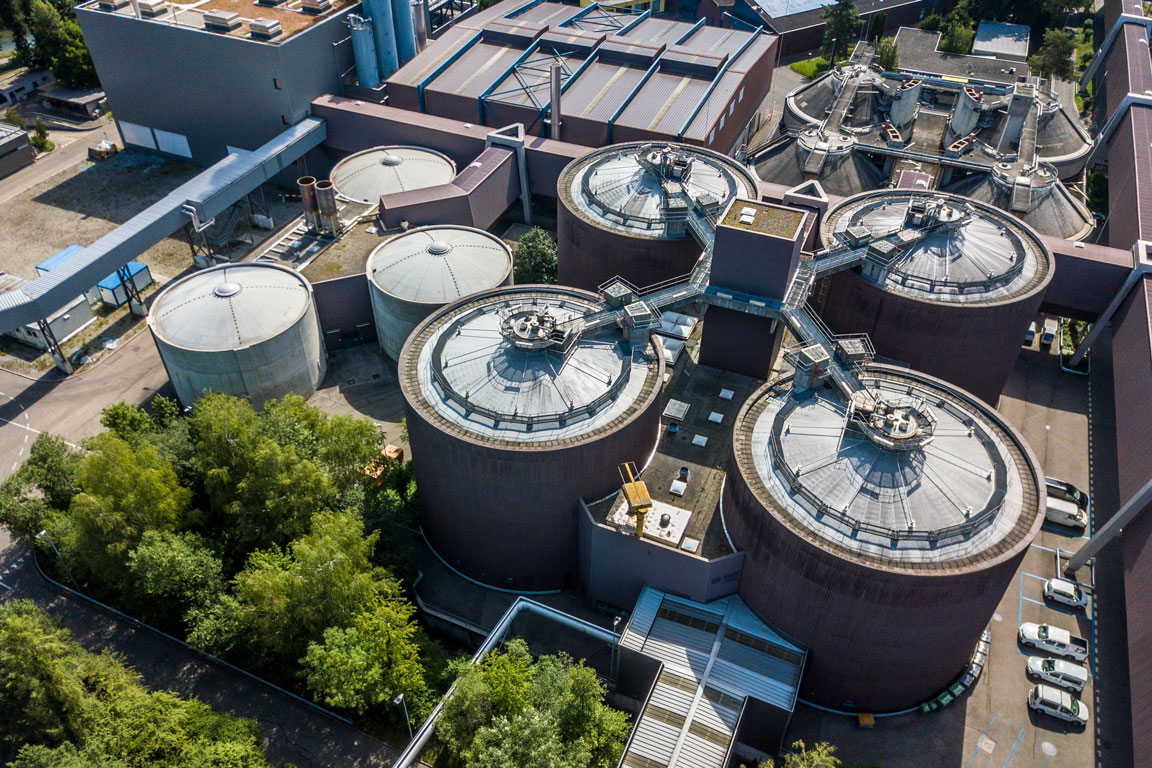 With a generating capacity of 1,086,300 kilowatts, this power plant began operations in 1955.  In 2012 a new water treatment system was put on-line to treat incoming water to the plant that was required for internal use.  A bulk silo for Hydrated Lime was integrated into the upgrade along with a slaking system which were installed for pH control and to reduce the hardness of the water.  From the beginning, some of the issues with the dry system which was operational only 8 months, included:

This plant now utilizes a 35% Lime Slurry Plus system installed by W.K. Merriman.  A 12,675 gallon flat bottom (12' x 15') storage tank was installed with a 7.5 HP mechanical mixer, (2) peristaltic pumps that included the necessary water flush lines.  The maintenance savings with personnel and down time helped justify the conversion.  With the Lime Slurry, level indication is easy with the "Omni-Site" inventory monitoring system that sends an email/text with a low level alarm notifying when a full load should be ordered. 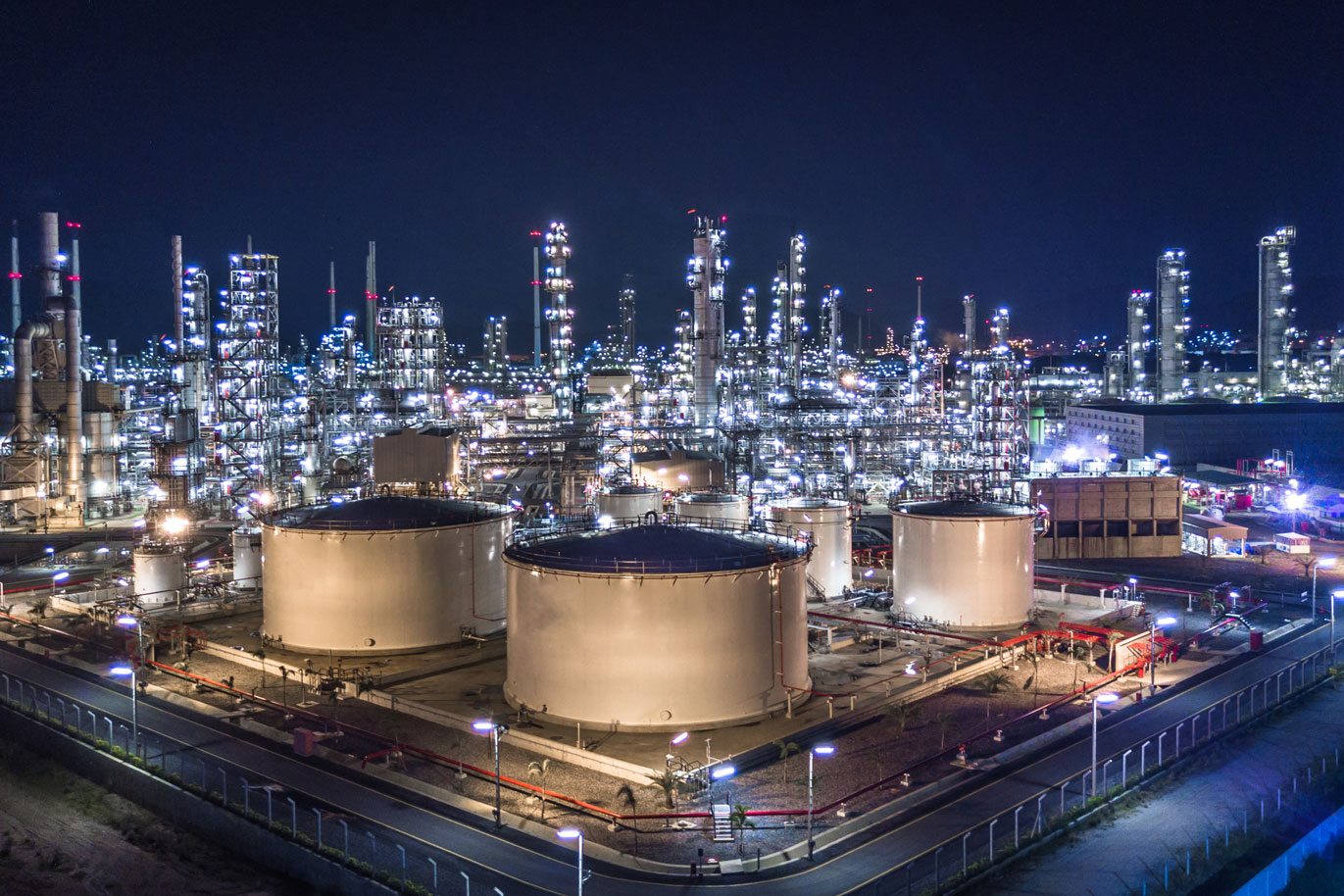 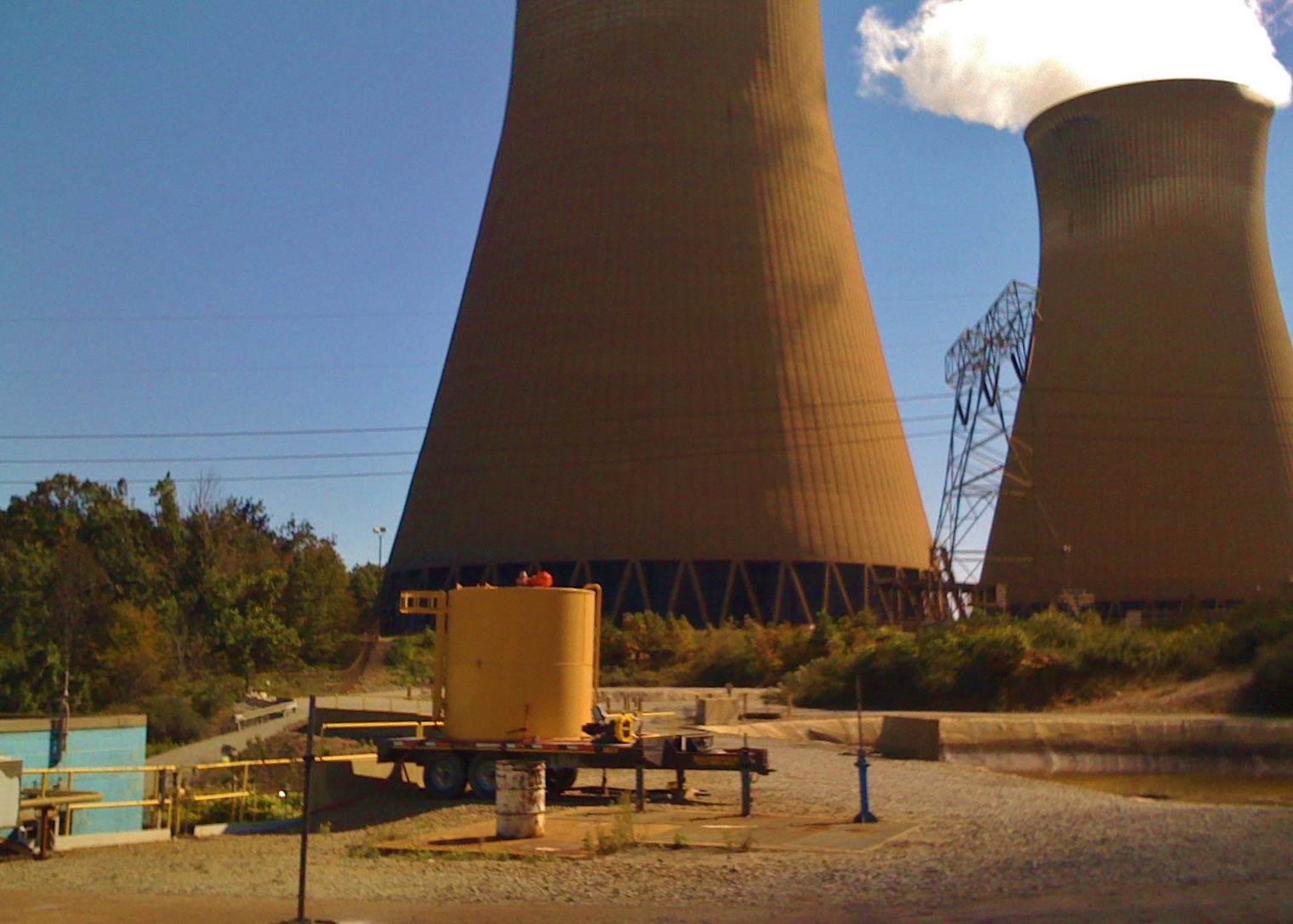